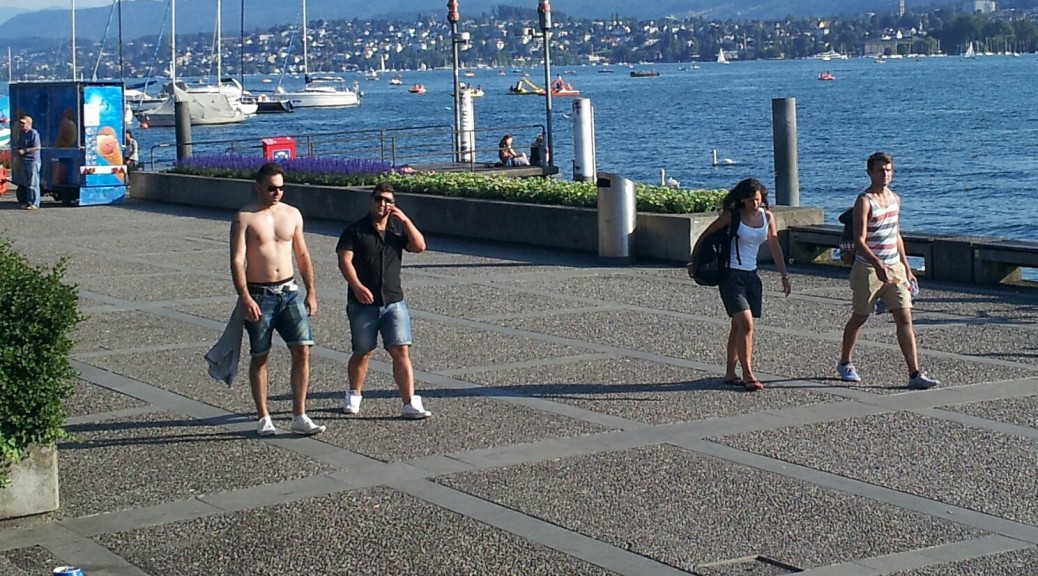 As a metropolis of experiences by the water, with a magnificent view of the snowcapped Alps on the horizon, Zurich offers a unique mixture of attractions – over 50 museums and more than 100 art galleries, international fashion labels and Zurich designs, and the most flamboyant and lively nightlife in Switzerland. Recreational activities range from a visit to the riverside and lakeside bathing areas in the very heart of the city, to a spectacular hike on the Uetliberg mountain.

The city of Zurich lies in the heart of Europe and at the center of Switzerland, on the northern shores of Lake Zurich. Its multicultural flair and the variety of leisure activities on offer attract guests from all over the world to this “region of short routes”. Zurich is quick and easy to reach, whether by train, plane or private vehicle. Its international airport has direct connections with over 150 destinations. Just a 10-minute train ride from the airport and situated right in the city center, Zurich’s Main Railway Station is regarded as a central European railroad hub. A total of 370,000 people live in this experience, science and business center. Thanks to its top-quality infrastructure set amidst natural surroundings, it is a popular place for study and research. For example, at Zurich University or the Swiss Federal Institute of Technology Zurich (ETH); built in 1855 by Gottfried Semper, the ETH Zürich is today associated with 21 Nobel prizewinners.

Trend-setting Zurich is a shopper’s paradise and a metropolis of the arts, home to legendary nightlife. Nature is on the doorstep – and Zurich’s overall quality of life is frequently voted the best in the world.

Zurich boasts the highest density of clubs in Switzerland – here, you can never turn up too late. From a house music party in the legendary Kaufleuten to Greatest Hits from the Eighties at the oldest club in the city, the Mascotte, to a gay event at the Labor Bar – parties really get going after 11.00 pm and continue into the wee hours of the morning. Here, there are no official closing times. In summer, nightlife can be found not only in the clubs, but also outside in the open air; the venues where visitors bathe and relax during the day are ideal places to flirt and dance at night.

The Kunsthaus Zürich boasts Zurich’s largest collection of modern art and is renowned both for its permanent art collection and its temporary exhibitions. In addition to works by Alberto Giacometti there are also significant pictures by Picasso, Monet and Chagall as well as numerous contemporary Swiss artists.

An exciting mix of new and old has been created in Zurich West on the Löwenbräu-Areal premises. Two new high-rises stretch above the old brewery and further emphasize the architectural shape provided by the silos. A black, elegant building 230 feet high and with an overhang giving it the appearance of a cobra looms up behind the old brewery. The industrial past is still very visible, and the characteristic historic building from 1897, the chimney and the steel silo all nicely preserved.

The Prime Tower is Zurich’s tallest building, a sparkling, glass-clad construction soaring 105.5 metres above the fashionable Zurich- West district. Head up to the Clouds restaurant on the 35th floor for drinks or dinner – and spectacular views over the city, lake and mountains.

The Uetliberg with its summit at the Uto Kulmo 871 metres above sea level towers above the roofs of Zurich. From the top you can enjoy a magnificent panoramic view of the city of Zurich, Lake Zurich and the Limmat Valley up as far as the Alps. The Uetliberg is particularly popular in November, as its summit is often above the blanket of fog that can cover the city at this time of year. In the winter, the hiking trails to the summit are converted into sledding runs. In summer, there’s plenty to discover on well-marked hiking routes, a mountain bike route, and on the Planet Trail. This hour-and-a-half to two-hour walk from Uetliberg to the Felsenegg cableway in Adliswil takes you on a fascinating tour through a model of our solar system.

The highest concentration of clubs in Switzerland, one of the most famous shopping miles, and a plethora of cultural offerings. And all of this against a medieval background. Zurich Old Town is a cultural, social and historical melting pot.  Zurich’s Medieval houses, contorted, narrow lanes and guild and town halls from the Renaissance period offer an attractive backdrop for world-class entertainment. A tour of the Old Town lets visitors experience Zurich’s multifaceted past. The backdrop turns into a living history of characteristic buildings and the people that lived and acted out their lives in them.   The double towers of the Grossmünster (Great Minster) are Zurich’s landmark. According to legend, Charlemagne built the towers at the location where the graves of the city saints Felix and Regula were discovered. Further sights worth seeing include the Peterskirche (Peter’s Church), which has Europe’s largest clockface, and the Fraumünster (Minster of Our Lady), which is known for its stained glass windows by Giacometti and Chagall.

The celebrated Old Town district of the Niederdorf is affectionately known by locals as the Dörfli – the “little village”. With its winding, car-free alleys, its emblematic Grossmünster church and its many small boutiques, antiquarian bookshops and craft studios, it is a delight to explore both by day and in the evening. The Niederdorf also perfectly embodies the city’s unique charm. The Schober-Péclard boutique and confectionery, for example, is a listed building that stylishly combines the elements that make a trip to Zurich so special: history, architecture and shopping.

Life has returned to the area under the arches of the railway viaduct built in 1894 in Zurich-West. A 550-yd-long urban meeting place invites you to stroll, shop, enjoy, eat and drink.  A shopping paradise has been created under 36 viaduct arches. The colorful mix of delicatessens, studio galleries, sport and fashion boutiques is open to the public. At the heart of it all is the Market Hall where 20 farmers and food vendors from the area offer their wares.

The bent, almost banana-shaped Lake Zurich is framed on the southern side by the Albis and Zimmerberg hills and on the north by the Pfannenstiel chain of hills. The lake is bordered by the cantons of Zurich, St.Gallen and Schwyz. At the western end lies Zurich, Switzerland’s largest city.  Whereas, in the past, the lake was above all a route for traffic and transport, today it is a popular place for excursions, and homes along its shores are much sought after. Gently rocking waves, peace and quiet, relaxation and fine food: the best way to discover the Lake Zurich area is by taking a boat trip. Most of the places around the shore are served by a regular boat service all year round. The undisputed favourites with the public are the two historic paddle-steamers. From the “Gipfeli-Schiff” (early mornings) to the “Sonnenuntergangs-Schiff” (sunset sailings), there are all kinds of special excursions available. Musical trips and special tours on public holidays are all part of the programme offered by the Lake Zurich shipping company.

The famous “golden coast” extends along the northern side of the lake, from Zollikon to Feldmeilen. This sun-soaked region is famous for its low rates of taxation and high property prices, and is therefore the stretch of coast where you can seen the magnificent houses and villas of the upper echelons of society.

At the eastern end of the lake is the “rose town” of Rapperswil. In the public gardens here you’ll find over 15,000 rose bushes blooming, of more than 600 different varieties. The lakeside promenade with its Mediterranean charms, the picturesque Old Town and the medieval castle make this harbour town a popular place for excursions. For young visitors, Knie’s Children’s Zoo is high up on their wish-list.

Popular places to visit around Lake Zurich include the numerous swimming areas, the Alpamare in Pfäffikon – the largest covered water park in Europe – the sunny islands of Ufenau and Lützelau near Rapperswil, the wooden footbridge across the lake between Rapperswil and Hurden, the Baroque church in Lachen, the famous Lindt & Sprüngli chocolate factory in Kilchberg and, of course, the dynamic metropolis of Zurich, with all its many sights, the famous shopping mile of the Bahnhofsstrasse and its vast range of cultural amenities

Stretching for 1.4 kilometres from the main railway station to the lake, the Bahnhofstrasse is one of the most famous shopping streets in the world.  Strung along it like pearls on a necklace are department stores, boutiques and jewellery shops; the further you stroll towards the lake, the more exclusive the shops become. Along the way, alleys such as Rennweg and Augustinergasse lead off into the picturesque Old Town.

The National Museum houses the largest cultural and historical collection in the country. Behind its over 100-year-old walls, history comes to life as visitors gain an insight into how previous generations lived, thought and felt.  With everything from substantive legacies of art and crafts to ordinary everyday objects, the museum reveals the life of the Swiss, from prehistory to the present. Special exhibitions focus on socially relevant issues, offering a temporary change of perspective. Gustav Gull built the Swiss National Museum in 1898 to mark the 50th anniversary of the first federal constitution. The museum building, set between the main train station and the Platzspitz Park, is reminiscent of a fairytale castle.

Wellness and the City – AQUA-SPA-RESORTS

Discover the delights of Zurich’s new Thermal Baths & Spa – from the pools down in hundred-year-old vaults all the way up to the rooftop baths. Relax in soothing warm water in giant wooden vats – reminiscent of the barrels used in this former brewery – under an impressive barrel-vaulted ceiling, one hundred years old. Thermal attractions here range from massage jets to bubble seats and loungers, a sequence of water massages, whirlpool baths and relaxation area with shallow-water zone. Further highlights include the emerald bath, a meditation pool with underwater music, a steam bath and a Kneipp hydrotherapy sector. The top attraction here – literally – is the open-air pool on the roof of the former brew house, open year-round and offering breathtaking panoramic views of the whole of the city of Zurich and the mountains beyond.

Elephants, rhinos, tigers, penguins and 20 species of monkeys are just some of the more than 360 animal species that can be admired at the Zurich Zoo. In the Masoala Rainforest Hall visitors can experience a piece of Madagascar first hand. A must-see for young and old.  Wander along a winding path through a 11,000m2 tropical environment with its exotic plants and animals. You can also enjoy spectacular views of the rain forest from the adjacent restaurant.

To stand high above Europe’s largest waterfall, feeling the roar and vibration of the water over one’s entire body – this can be experienced at the Rhine Falls near Schaffhausen. By ship one can reach castles, the Rhine Falls Basin and even the mighty rock in the midst of the waterfall.  Over a breadth of 150 meters, several hundred cubic meters of water rush into the depths at the rate of 23 meters per second.